Lately, it feels as though the Western world paints Islam as this new phenomenon that came to the United States only recently. Immigrants from Muslim majority countries started showing their face on American soil in the last few years, right? Most definitely wrong! Muslims were here before the United States even became its own country. Through the Atlantic slave trade, many Africans were forced into this land, and we seldom hear about some of their Muslim backgrounds. In history books, slavery is mentioned as this bad thing that happened, but the humanity of these people is often overlooked just as it was in the 1700s. We need to start talking about their stories and realize these people deserve much of the credit for building this country into what it is today.

One such person is Ayuba Suleiman Diallo. He was from eastern Senegal, born to a family of religious leaders. He memorized the entire Quran, was an expert in Maliki fiqh (one of the four schools of Islamic jurisprudence), and possessed an immaculate intelligence.

Despite his accomplishments and status in his homeland, he like so many others in Africa, was a victim to the Atlantic slave trade. Enemies captured him, shaved his beard (a distinguishing feature of Muslim men), and sold him to work on a tobacco plantation after his ship landed at Annapolis, Maryland in 1731.

Throughout this difficult time, Diallo upheld his daily prayers and Islamic diet. He ran from the family who owned him because praying became difficult. When the children of the family would see him pray, they threw dirt on him and mocked him. But soon after fleeing, Diallo was again captured and this time, taken to prison.

This is where Diallo met English lawyer Thomas Bluett. Diallo’s piety, literacy, intelligence, and adherence to faith impressed Bluett, who ended up befriending him. Bluett wrote about Diallo in Some Memoirs of the Life of Job:

“His Memory was extraordinary; for when he was fifteen Years old he could say the whole Alcoran [Quran] by heart, and while he was here in England he wrote three Copies of it without the Assistance of any other Copy, and without so much as looking to one of those three when he wrote the others. He would often laugh at me when he heard me say I had forgot any Thing, and told me he hardly ever forgot any Thing in his Life, and wondered that any other body should.”

Diallo wrote a letter (seen below) in Arabic to send to his father, and it traveled from Annapolis to England. Eventually, this letter landed in the hands of James Oglethorpe, the founder of the Georgia colony. Oglethorpe had Diallo’s letter translated at Oxford, and like Bluett, was also very impressed by him. He was touched by the struggles presented in the letter, and he subsequently sent the amount needed to purchase Diallo’s freedom and bring him to England in 1733. Additionally, Oglethorpe arranged to have slavery banned in Georgia after reading the letter. (Not soon after Oglethorpe returned to England in 1742, however, the ban was uplifted due to the colonialist settlers’ persistence.) 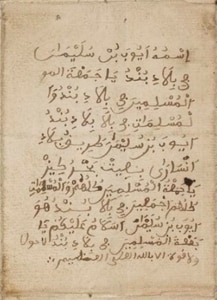 During the voyage to England with Bluett, Diallo maintained his worship. He even slaughtered animals on his own in accordance to Islamic law so he could eat the meat. Within six weeks Diallo learned the English language despite being sick. After his arrival to England, he debated theology with the Christian priests and bishops, and they joined the already lengthy list of people who Diallo impressed with his intelligence, monotheism, and morality. The King and Queen soon also joined that list. With all his interactions with the country’s social elite, Diallo was inducted into the Gentleman’s Society of Spalding, a club celebrating intellectuals and academia. Diallo, after suffering through such difficulties as becoming separated from his family, sold into the slave trade, forced to work in horrid conditions, humiliated by children, and imprisoned, was finally recognized as an equal.

This is illustrated in a famous portrait of Diallo by William Hoare. Search Ayuba Suleiman Diallo’s name online, and instantly, a picture pops up—the same one I came across on my Twitter timeline. In the painting, Diallo is depicted similar to others during this time, front-facing and respectable. This portrait is the first of a freed slave in the history of British art, and arguably, it is the first painting of an African Muslim man depicted as an equal, according to Dr. Lucy Peltz.

Diallo had agreed to the portrait as long as he was shown in his traditional garb. Because the painter did not know what that clothing looked like, Diallo described it to him. What he has hanging around his neck in the painting is one of the three copies of the Quran he wrote from his memory during his time in England.

In 1734, Diallo safely returned back to his home. His father died, one of his wives remarried because she thought he passed, and his home was wrecked due to war. However, he again overcame hardship, lift himself up, and was able to live a prosperous life.

Stories like Diallo’s remind us that Black Muslims were a huge part of building the United States from the beginning. Muslims did not start coming to America in the last few decades. They were here from the start. They were an integral part of this country then, and they are integral part of this country now. By reading and discussing these historical figures, we can see their amazing resilience in the face of hardship, appreciate how their lives impact ours today, and aspire to be as strong as they were.

The history of enslaved Muslims in the West is well documented. What is less well know is the influence they had and the impact they left in the communities that they were enslaved in. In a captivating speech, Imam Zaid Shakir talks about the legacy that great individuals such as Ayuba Suleiman Diallo and Abdu-l-Rahman Ibrahim Ibn Sori played during the time of slavery in the United States. He outlines the importance of making connections with our Islamic history and why it is important to be aware of how their steadfast nature and upright character serve as examples to Muslims across the world today.