During the later part of the 11th century, Baghdad introduced the precursor to the modern university in the form of a chain of madrasahs which housed students and a salaried faculty. They were known as the Nizamiyah, after their founder Nizam al-Mulk, a Seljuk vizier. The largest and most splendid of these was located in Baghdad; the great theologian al-Ghazali and the celebrated historian of Saladin, Baha Eddin, were lecturers there. [Click here to read more about the importance of knowledge in Islam.]

The al-Mustansiriyah college was established in 1234 C.E. by Caliph al-Mustansir. It was a large two-storied building, oblong in shape, with a courtyard in the center. Housing and food were provided for those students who required it. The curriculum included religious studies, mathematics, medicine, and history, among other subjects. 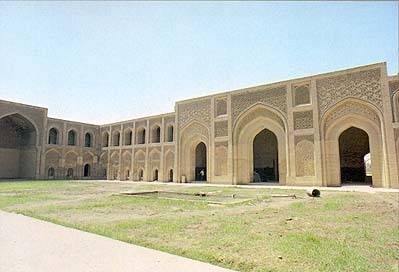 The modern hospital has its roots in a similar institution as established by the Abbasids in Baghdad, something hitherto unheard of. The first hospital was founded in 914 C.E. Another hospital was built in 918 C.E. at the behest of Caliph Muqtadir.

Among the physicians here was the renowned Al-Razi (Rhazes). Doctors treated and studied the patients, and documented their findings.

“By the year 1000, five major hospitals will have been built in Abbasid Baghdad. These hospitals will serve multiple purposes, not unlike modern hospitals containing surgery centers, outpatient clinics, psychiatric wards, convalescent centers, and even nursing homes. And quite often they are free to those in need,” writes Michael Hamilton Morgon in Lost History, the Enduring Legacy of Muslim Scientists, Thinkers, and Artists. [Read more: Foundation of Baghdad]