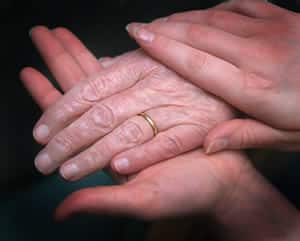 On a visit to a post office in San Diego, California, I noticed an elderly lady struggling to get out of her car. Alone and probably in her mid seventies she held the door with a trembling hand as she stepped out of the driver’s seat.

“May I help you Ma’am?”, I said, stepping out of my own car with an outstretched hand.

“No, Thank you”, she replied, politely and with a smile, perhaps reluctant to take help from a stranger.

I watched her as she proceeded towards the building with difficulty. Her dignified refusal, despite the difficult situation she was in, moved me immensely. She was clearly too old to be running errands, and perhaps too old to drive safely.

I realized that the situation of this old lady was not unlike millions of other elderly the world over, who are deprived the love and care they need and deserve in their old age.

The American Pscychological Association reports: Every year an estimated 2.1 million older Americans are victims of physical, psychological, or other forms of abuse and neglect. Those statistics may not tell the whole story. For every case of elder abuse and neglect that is reported to authorities, experts estimate that there may be as many as five cases that have not been reported.

Even in countries that are known for relatively stronger family structures, the elderly are increasingly getting short shrift. According to HelpAge India, most elders are ill-treated by their own children, who have emerged as the the largest group of perpetrators at 47.3 per cent of all cases of abuse!

While Islam emphasizes respect for all elders in society, children have a special responsibility towards their parents.

“Thy Lord hath decreed that ye worship none but Him, and that ye be kind to parents. Whether one or both of them attain old age in thy life, say not to them a word of contempt, nor repel them, but address them in terms of honor. And, out of kindness, lower to them the wing of humility, and say: “My Lord! bestow on them thy Mercy even as they cherished me in childhood.” [Translation of Al-Qur’an 17:23-24]

In these verses, kindness towards parents is mentioned along with belief in One God. These two verses reflect the compassion, respect and sense of responsibility that Islam requires the believers to have towards their parents.

The Prophet declared that parents have the right to be obeyed by their children. In one of his narrations, the Prophet stated that the major sins are to believe that God has partners, to disobey one’s parents, to commit murder, and to bear false witness [Bukhari, Muslim].

Islam makes it mandatory for children to be responsible for the maintenance of their parents once the children have become independent.

In the last few years, there has been a renewed interested internationally in the plight of the elderly. Many conferences and symposia have emphasized that often the elderly are not accorded the respect and dignity that every human being needs, even if they are provided basic maintenance.

Compassion and respect towards the elderly is an essential element of Islamic conduct. The Prophet of Islam stated clearly:

Far from the abuse and neglect that we see in present day society the elderly have a protected and dignified status in Islam. Traditionally Muslims have accorded their elders this lofty status, and the decline in this practice we see in some Muslim countries is concomitant with the overall decline in adherence to Islamic principles.

In the cycle of life, the youth and old age are only a matter of time, for one who is young, must surely grow old one day. Islam reminds the young of this basic truth of the human condition, through a narration of the Prophet in which he stated “If a young man honors an elderly on account of his age, God appoints someone to honor him in his old age.” [Hadith from At-Tirmidhi]

May God help us all, to fulfill our duties towards our elderly, to love and respect them as they ought to be loved and respected, and to set a good example for our own children.