Sanctity of Life: The Islamic Position on Terrorism9 min read

Request a copy
View in PDF 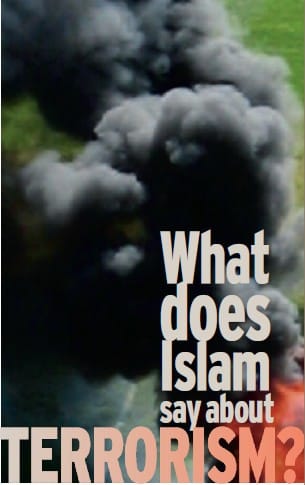 Perhaps the greatest misunderstanding about Islam today is that it is an inherently violent religion whose followers condone acts of terrorism. In reality, terrorism and indiscriminate violence completely contradict the teachings of Islam. Islam is a religion of mercy and ethics.  It encourages people to beautify their relationship with God and with those around them through good character and deeds. This pamphlet addresses several misconceptions regarding Islam and violence; in the process, it shows that terrorism inherently conflicts with Islam’s foundational beliefs and teachings.

The Quran, the divinely revealed scripture of Islam, displays an extraordinary respect for human life: “…if anyone kills a person – unless in retribution for murder or spreading corruption in the land – it is as if he kills all mankind, while if any saves a life it is as if he saves the lives of all mankind” (5:32). At another point, the Quran states, “…do not take the life God has made sacred, except by right. This is what He commands you to do: Perhaps you will use your reason” (6:151).

Muhammadp, who Muslims revere as God’s final messenger to humanity, listed murder as one of the major sins. He warned his followers, “The first cases to be settled between people on the Day of Judgment will be those of bloodshed.” Muslims are even prohibited from indiscriminately harming animals, and have been taught by Prophet Muhammadp that “there is reward in kindness to every living thing – animal or human.”

Furthermore, Islam encourages people to bring about benefit and good for others in every way possible.  In the Quran, God (Allah in Arabic) praises those who have given preference to others over themselves (59:9). Prophet Muhammadp has said, “God constantly helps the one who helps his brother,” and, “Even a smile or kind word is charity.” There is particular emphasis in Islam on helping the downtrodden in society, especially orphans, the poor and needy. Muslims are instructed by their faith to work for the betterment of their communities, societies and the world at large. Simply put, Muslims are commanded to build, not to cause harm or destruction.

Consequently, Muslims struggle on a daily basis to uphold a treasured spiritual principle: to strive, to endeavor, to exert. It may be to purify oneself of negative habits, to care for one’s aging parents, to cope with loss, to spend one’s wealth on charitable causes, to communicate the word of God or to speak truthfully in the face of an unjust ruler. In other words, they perform jihad.

The Meaning of Jihad

Jihad is often mistranslated as ‘holy war’ – a term that actually has no equivalent in the Quran. Jihad literally means ‘striving’ and refers to any struggle a person engages in for a righteous cause. Muhammadp explained that a fundamental form of jihad is the internal struggle an individual tackles in order to reform one’s self.

Physical struggle is one of the many dimensions of jihad. Islam permits engagement in war for purposes of self-defense and combating oppression, after all efforts at peace fail. God proclaims in the Quran: “Why should you not fight in God’s cause and for those oppressed men, women, and children who cry out, ‘Lord, rescue us from this town whose people are oppressors! By Your grace, give us a protector and give us a helper!’” (4:75).

Although the combative form of jihad and terrorism are often linked in people’s minds, there are key differences between the two. For example, jihad is limited to combatants while terrorism causes the death of civilians. Also, jihad is bound by strict rules of engagement but terrorism has no such limits. Hence, it’s important to distinguish between terrorism, constituting of cruel, vengeful attacks, and physical jihad, which is a dignified form of conventional war.

The objectives of warfare in Islam are to establish justice and end oppression; the motive for combative jihad can never be to forcefully convert others or to seize territory and resources. God permits self-defense in the Quran by stating, “To those against whom war is made, permission is given (to fight), because they are wronged” (22:39). While consent is given to defend oneself, it should never lead to injustice against others. God says in the Quran, “Fight in God’s cause against those who fight you, but do not overstep the limits: God does not love those who overstep the limits” (2:190).

There are also very strict restrictions and rules for engaging in warfare.  No fruit-bearing trees, crops, animals or infrastructure should be destroyed.  Properties should not be damaged, and poisoning water sources is forbidden.  The opposing side must be treated justly, with the wounded and prisoners of war given fair and humane treatment. More importantly, non-combatants are never to be harmed.  Prophet Muhammadp instructed his followers, “Do not kill any elderly person, woman or child,”  “Do not kill people who are sitting in houses of worship” and “Do not kill the monks in their monasteries.”

Hence, Muslims must maintain high ethical and moral standards even during war, and strive to cease the conflict as soon as possible. Their goal should always be to achieve peace and justice. As God declares in the Quran, “If they incline towards peace, you must also incline towards it, and put your trust in God: He is the All Hearing, the All Knowing” (8:61).

Despite the facts, many people continue to associate Islam with violence. According to Karen Armstrong, a renowned author of books on comparative religion, this is a “received idea” from the times of the Crusades, which is being reinforced with the current cycle of violence.

“Islam does not preach violence, it does not preach vicious holy war; it certainly does not condone terror, suicide bombing or anything of that sort. Like all of the great world religions, it preaches compassion and justice, and that is why it has been a success,” emphasizes Armstrong.

Unfortunately, many associate even the success of Islam with violence, mistakenly believing that Islam was spread by the sword. In Islam, the matter of one’s faith is a personal choice between an individual and God. God explicitly says in the Quran, “There is no compulsion in religion” (2:256).

In the early history of Islam, when Muslim rule stretched from Western Europe to China, the various peoples living in these lands were not forced to convert to Islam. They were free to keep their own religions, though many chose Islam over generations. In numerous places, Islam spread via trade, communication and peaceful assimilation. For example, Islam reached Indonesia through Muslim traders dating back to the 13th century C.E. Today, Indonesia is the largest Muslim majority country in the world, with more than 200 million Muslims.

In his 1923 work, Islam at the Crossroads, historian De Lacy O’Leary refutes the myth that Islam spread by means of violence. He states, “History makes it clear … that the legend of fanatical Muslims sweeping throughout the world and forcing Islam at the point of the sword upon conquered races is one of the most fantastically absurd myths that historians have ever repeated.”

The worshippers of the All-Merciful are they who tread gently upon the earth, and when the ignorant address them, they reply, “Peace!” (Quran, 25:63)

Indeed, tolerance and coexistence with people of other religious traditions have been the hallmark of Muslim societies historically. Muslims are commanded by their faith to safeguard the rights of minorities and ensure that their religious sentiments are respected.

This is particularly the case with Christians and Jews, who are mentioned in the Quran as ‘People of the Book.’ Muslims are required to protect their right to worship according to their respective religions, and to safeguard their houses of worship.  Proof of this can be seen in the existence of old churches and synagogues throughout the Muslim world, including places like Turkey, Egypt, Palestine, Syria and Bosnia.  This is evidenced by the presence of significant non-Muslim populations in many Muslim-majority countries as well.

A substantial number of Muslims also live in peaceful coexistence with people of other faiths worldwide, including China, India, England, Nigeria and the United States. As minorities, Muslims are obliged to adhere to the laws of the land in which they live.  They are considered to have entered into a covenant of protection with the government that must be honored and respected.

No matter where they reside, Muslims are taught by their faith to maintain kind and respectful treatment of others. In the Quran, God repeatedly reminds us of our common humanity. He states, “(God) created you all from a single man and a single woman, and made you into races and tribes so that you should recognize one another. In God’s eyes, the most honored of you are the ones most mindful of Him” (49:13).

In keeping with its rich history, the vast majority of the world’s 1.6 billion Muslims condemns all forms of unjustified violence and has worked to bring positive, uplifting changes in their communities. Unfortunately, popular media tends to ignore these contributions, focusing more on the sensational and violent actions of fringe groups and individuals. This reinforces an oversimplified and inaccurate image of Islam and Muslims, reducing both to a caricature of violence and terror.

Islamic scholars and organizations worldwide have publicly affirmed that the misinterpretation of Islam to justify acts of violence against innocent people is completely against the basic teachings of Islam. They have also vocally denounced terrorist attacks. These condemnations have come from renowned authorities on Islam across the world, including the Islamic Law Council of North America, the European Council for Fatwa and Research, the Islamic Council of Spain, the Grand Mufti of Saudi Arabia, scholars from Al-AzharUniversity in Egypt, the scholars of Deoband, India, as well as numerous others.

At the same time, it is important to recognize that terrorism is a global epidemic that manifests itself in various forms and afflicts practically every community that is mired in political and social problems across the globe. In other words, while terrorism involving Muslims represents a deviation from Islamic principles, it is by no means confined to Muslims alone.

In a world full of conflict, the most effective way in which we can combat terrorism is by building bridges of compassion and cooperation – no matter what our races, ethnicities or religions may be. Only then can we come closer to our shared goals of security and peace, thereby sanctifying life just as God intends us to – not only for ourselves, but for future generations as well.

Note: The subscript p next to Prophet Muhammadp represents the invocation Muslims say with his name: May God’s peace and blessings be upon him.