Muslims Around the World: An Introduction4 min read

Fourteen hundred years ago, God sent Angel Gabriel to reveal the religion of Islam to Muhammad (peace be upon him). God transformed him from an ordinary man to the last of the Prophets. He was given the responsibility of guiding humanity to righteousness and the worship of One God alone.

Muhammad (pbuh) advised his fellow Arabs in Mecca to cease their worship of idols and to affirm the Oneness of God. He warned them of an afterlife where they will be held accountable for the evils they committed such as paganism, promiscuity, and petty tribalism. He also gave glad tidings of paradise to those who obey God and His Prophet and lead socially conscientious lives.

Prophet Muhammad (pbuh) and his small group of followers endured persecution, boycott, exile, and warfare before they finally achieved acceptance and success. Eight years after Muhammad and his followers had fled Mecca, they returned to their hometown 10,000 strong in a peaceful and spiritual revolution.

His powerful message and extraordinary persona had overcome the most ardent enemies of Islam. Impressed by the relevance, resonance, and rationality of the message he proclaimed and attracted by his humility, honesty, and humanitarianism, the Arabs embraced Islam in hordes upon hordes. By the time Muhammad (pbuh) died, twenty-three years since he first began spreading God’s message, the entire Arabian Peninsula had pledged their allegiance to him.

Islam had transformed an ignorant society into one of the most enlightened civilizations in history. Their faith provided the Muslims with complete guidance and a foundational springboard as they proceeded to attain unparalleled achievements in human rights, enfranchisement of women, military expeditions, scholarship, inventions, institutions, law and arts, among others. 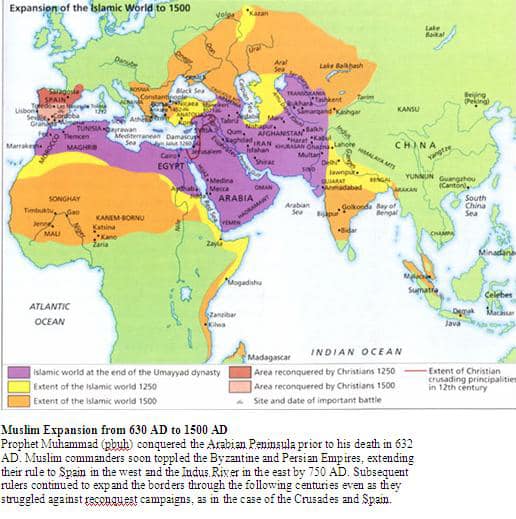 From its very inception, Islam heralded an era distinguished by its commitment to freedom of religion. Hence, Muslim empires, from the Umayyads to the Abbasids to the Ottomans, were renowned for tolerance of and peaceful coexistence with people of different faiths. Palestine, the strip of land dear to Jews, Christians, and Muslims, serves as the hallmark of this Islamic trait: when Muslims conquered Palestine in 637 A.D., they invited the Jews to settle in the holy land after 500 years of exile; when Muslims retook Palestine from the Crusaders in 1187 A.D., they ensured the safe passage of departing Christians in sharp contrast to the bloodbath the Crusaders had subjected Muslims to in 1099.

Furthermore, Islam took root gradually in the conquered people despite the swiftness with which Muslims expanded their rule, reinforcing the freedom with which people practiced their religion in Muslim lands. In fact, in many areas of the world, Islam spread through trade, interaction, and intermarriages. Lastly, Islam impacted lives and landscapes wherever it went, resulting in a legacy which has shaped the world as we know it today. (See Ten Largest Muslim Populations)

In his 1993 address on “Islam and the West” at the Sheldonian Theatre, Oxford, Prince Charles acknowledged this legacy and lamented its historical neglect in the following words:

If there is much misunderstanding in the West about the nature of Islam, there is also much ignorance about the debt our own culture and civilization owe to the Islamic world. It is a failure, which stems, I think, from the straight-jacket of history, which we have inherited. The medieval Islamic world, from central Asia to the shores of the Atlantic, was a world where scholars and men of learning flourished. But because we have tended to see Islam as the enemy of the West, as an alien culture, society, and system of belief, we have tended to ignore or erase its great relevance to our own history.

In the spirit and hope of lifting the veil of a 1000 years of contributions and their impact on our modern world, this section highlights the historical heritage of Islam as it spread to Asia, Europe, and Africa.

Furthermore, over the last few centuries, Muslim minorities have emerged in every area of the world, from the Americas to Australia. Approximately seven million Muslims live in the United States, representing the most diverse Muslim community in the world. This Muslim presence is also explored in this section in order to show the continuing involvement of Muslims across the globe. 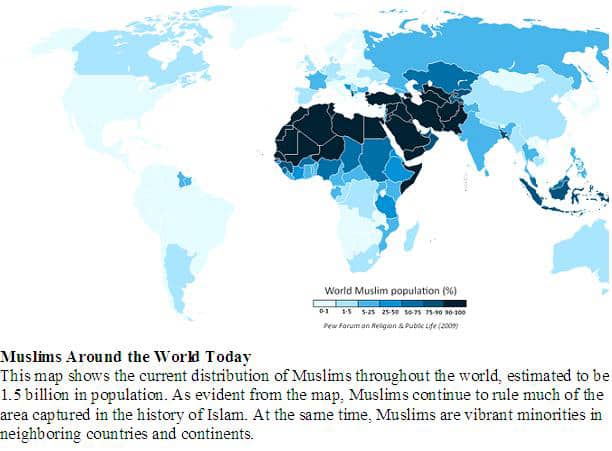