Muslims learned how to make paper from the Chinese, and proceeded to transform this art into a major industry. By 793 C.E., there were many paper mills in Baghdad. This was a revolutionary development because the existing alternatives to paper were papyrus, which was fragile, and parchment, which was expensive; paper, on the other hand, was relatively cheap. This mass availability of paper enabled Muslims to commit vast amounts of translations and original research to paper; as a result, libraries and bookstores became a common sight in Baghdad, and soon spread to other Muslim cities.

By the thirteenth century, Baghdad had thirty-six libraries and a 100 book dealers, some of whom were also publishers. The concept of a library catalog dates back to this period; books in these libraries were organized under specific genres and categories. Besides these, many nobles and merchants had private collections of books.

“We hear of a private library in Baghdad, as early as the ninth century, that required a hundred and twenty camels to move it from one place to another. Another scholar of Baghdad refused to accept a position elsewhere because it would take four hundred camels to transport his books; the catalogue of this private library filled ten volumes. This is the more astonishing when it is realized that the library of the king of France in 1300 had only about four hundred titles,” writes Artz in his book, The Mind of the Middle Ages.[2]

In addition to libraries and bookshops, the Muslims of Baghdad established an academy devoted to research and intellectual enhancement followed by an institution which is widely acknowledged as the precursor to the modern university, and the very first hospital. [Click here to read more about similar achievements by Muslims in Europe.]

Caliph Haroon al-Rasheed is credited with expanding the glory of Baghdad to its greatest height during his reign from 786 to 809 C.E. He created an intellectual ambience by encouraging mathematicians, astronomers, scientists, and philosophers. His son, Caliph al-Mamoon went a step further by establishing the House of Wisdom in, an academic institute devoted to translations, research, and education. It quickly became one of the most famous centers of learning, attracting scholars from all over the world, from many cultures and religions.

Here, teachers and students worked together to translate Greek, Persian, Syriac and Indian manuscripts. They studied the works of Aristotle, Plato, Hippocrates, Euclid, Ptolemy, Pythagoras, Brahmagupta and many others. Then, they began building on and testing the knowledge of the greatest ancient scholars, resulting in the development of the scientific method of observation and experimentation. 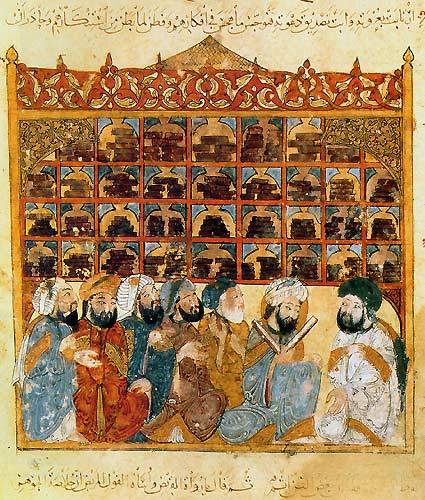 The House of Wisdom also housed an observatory which facilitated astronomical advancements, leading to refinements of such scientific tools as the astrolabe.

For centuries following the fall of Rome, Western Europe was a benighted backwater, a world of subsistence farming, minimal literacy, and violent conflict. Meanwhile Arab culture was thriving, dazzling those Europeans fortunate enough to visit cities like Baghdad or Antioch. There, philosophers, mathematicians, and astronomers were steadily advancing the frontiers of knowledge, as well as keeping alive the works of Plato and Aristotle. When the best libraries in Europe held several dozen books, Baghdad’s great library, The House of Wisdom, housed four hundred thousand. Jonathan Lyons shows just how much “Western” ideas owe to the Golden Age of Arab civilization.

[2] Although paper was exported in small quantities from the Muslim world by the 11th century, the Christian Church generally disfavored paper. In 1221 A.D., Holy Roman Emperor Frederick II declared all official documents written on paper to be invalid. The very first European paper mill was built by Muslim engineers in the 15th century in Italy at the request of influential Italian businessmen. The invention of Gutenberg’s printing press in the mid 15th Century forced a change in the Church’s attitude towards paper, and bulk supplies continued to be sold by the Ottoman Turks and Egyptians to Europe till the 17th Century, until Europe became self sufficient in paper production. (Wikipedia)