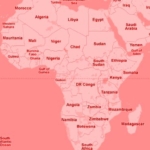 Islam’s presence in African history dates back to the first phase of the Prophet Muhammad’s mission, when in 615 A.D. he instructed a group of Muslims to seek refuge in Abyssinia (present-day Ethiopia).

While this was a short-lived encounter, Muslims eventually left a lasting influence in North Africa which has since spread to western, eastern, and central Africa. In southern Africa, Muslims are tiny but vibrant minorities. Over the centuries, Muslims have made significant contributions to Africa as we know it.

Africa enjoyed unparalleled scholarship and intellectual revival under Muslim rule. Cities such as Cairo, Timbuktu, and Kairouan were academic and cultural hubs which attracted scholars and travelers alike. Today, Cairo houses the world’s second-oldest university, Al-Azhar, and the latter two are UNESCO World Heritage sites. Each of these cities is profiled in this section, complete with historical and intellectual overviews.

Renowned Muslims such as Saladin, Ibn Battuta, and Ibn Khaldun were all linked to Africa by residence or birth and contributed greatly to the traditions of heroism, traveling, and social sciences, respectively. A brief biography of each personality is presented in this section, with a focus on their individual achievements.

Islam has had a lasting impact on Africa, affecting its languages, architecture, and culture. Furthermore, contrary to the conventional belief that a predominantly oral culture has always existed in Africa, a rich literate culture thrived among Africans historically – going back as far as a millennium.

Recently discovered Arabic manuscripts, which had been passed on through descendants for centuries, have proven this beyond a shadow of doubt. In fact, John Hunwick and R.S. O’Fahey are currently collecting them in a comprehensive six-volume series called Arabic Literature of Africa; four of the six volumes have already been published. An article linked below gives details regarding this monumental project.

Lastly, there is emerging mainstream acknowledgement that Islam first came to America through African slaves. Many of these slaves were literate and continued to secretly practice their religion, as in the prominent example of Omar ibn Said. Sylviane Diouf explores their lives in Servants of Allah: African Muslims Enslaved in the Americas, an excerpt from which is included in this section.

In conclusion, Islam had an enduring influence both in Africa and in the lives of the African diaspora, as clearly exhibited through the various articles in this section.

African Muslim Slaves in the Americas: An Understudied Presence

History of Islam in Africa by Sulayman Nyang