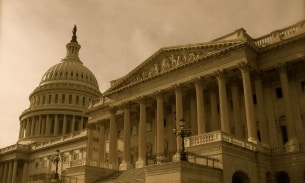 The following is a concurrent resolution by the 96th Congress (1979) honoring the 14th century of Islam.

Mr. Stone submitted the following concurrent resolution; which was referred to the Committee on Foreign Relations

Honoring the Fourteenth Centennial of Islam.

Whereas November 21, 1979, marks the fourteen hundredth anniversary of the founding of Islam, an event which will be commemorated throughout the world, including in the Holy Cities of Islam; and

Whereas Islam is one of the mankind’s great religions in history and today, followed by approximately eight hundred million people encompassing every major region of the world; and

Whereas the word “Islam” derives from Abraham’s willingness to accept all God’s commands, an example profoundly meaningful to all monotheistic religions; and

Whereas the “House of Islam” extended gracious hospitality to philosophy and science in both the East and West when these scholarly disciplines were threatened by narrowness and prejudice, thus preserving this precious heritage for subsequent generations; and

Whereas Islam strives for a world-wide community which, in the words of one Islamic poet-philosopher, “does not recognize the superficial differences of race, or history, or nationality”; and

Whereas the United States and countries of the Islamic world hold in common many benefits and values including the concept of world community, which inspired the founding Fathers of our own country; and

Whereas international understanding and peace are strengthened by free and open communications among nations representing various historical and religious traditions:

Now, therefore, be it Resolved by the Senate (the House of Representatives concurring),

That Islam is hereby recognized for the rich religious, scientific, cultural, and artistic contribution it has made to mankind since its founding.

Sec. 2. The Congress takes note of the contribution of Islam and wishes success to the fourteenth centennial commemoration.

Sec. 3. On the occasion of this anniversary, the Congress pledges its efforts to achieve better understanding, reductions of tensions, and the pursuit of improved relations with all nations of the world.

Sec. 4. The Congress requests that the President forward a copy of this resolution to the Chief of State of each country where Islam has a significant following and where celebrations will mark this important international event.

My Faith: Rep. Keith Ellison, from Catholic to Muslim