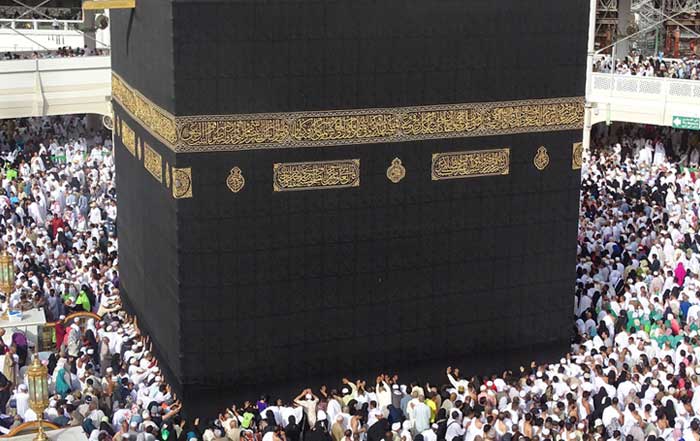 There are not many words that can accurately describe the feelings a Muslim experiences when traveling to the holy land of Makkah, home to the mosque known as Masjid al-Haram that contains the Kaba. One can attempt to label it as surreal, amazing, life-changing, breathtaking—but these words simply cannot encompass the entirety of what a Muslim feels when seeing the Kaba for the first time.

After long flights and bus rides riddled with unexplained waiting periods and crowds as far as the eye can see, a Muslim will finally look down and find his or her sandals stepping foot in Makkah, on that land the Prophet Muhammad (peace and blessings of God be upon him) tread some 1400 years prior. He or she will look up (or at least try to depending on the time of day—it is nearly impossible around noon when the sun is at its peak!) to see the minarets of Masjid al-Haram lining the Arabian sky that are so famously photographed in the weekend school books often studied during a Muslim’s childhood.

About one month ago, more than 2.35 million Muslims made this journey to Makkah for the annual Hajj, the Islamic pilgrimage that constitutes the fifth required obligation of the religion. People from literally all over the world gathered at the same place, at the same time, for the same reason—to fulfill this final obligation of their faith.

There are many takeaways from this physical, spiritual, and emotional journey—so much so, that a book could be (and many have been) written about them, but below I will attempt to explain one.

Prior to our departure date, I was quite nervous about embarking on this trip. I did not feel I was in the right physical state. The journey requires a lot of walking in blazing temperatures, easily over 100 degrees Fahrenheit. I also did not think I was in the right frame of mind spiritually. I thought I could be multiple levels higher than I was to really benefit from my time in Makkah, but when God sends you an invitation…there is no rejecting it. You go when you are called because ultimately, He knows when the best time is for you to be there. When God wills something to be, it is. It really is that simple and that out of your control. We were there in Makkah because God willed us to be there, He wanted my husband and I to perform Hajj this year. Alhamdulillah, all praises are due to God.

To reflect on this fact is really quite humbling. Despite all our shortcomings and pitfalls, despite all our past mistakes and disobedience to God, He still invited us to His house, the Kaba. He invited us to the Holy Land to fulfill the rites of Hajj and ultimately reap the reward of rebirth—returning home with all our sins forgiven, a fresh and clean slate, a second chance at living a life that is pleasing to Him and best for us.

And what did we do to deserve such an immense reward? Pilgrims are required to fulfill certain rites during Hajj, many of which require one to be in a specific place for a designated amount of time. While there, there are not many prescribed acts beyond the normal daily prayers. Pilgrims move from place to place at the times allotted for them, and by simply being present, many of the rites (even at their bare minimum) are fulfilled. Looking back, whatever sacrifices we made do not seem to amount to the reward that is promised. However, the exchange beautifully illustrates God’s mercy, God’s pardoning, and God’s love for His servants.

On the most important day of Hajj known as the Day of Arafah, pilgrims are to spend the day at Mount Arafah and its surrounding area. Here, they sincerely supplicate to their Lord asking for forgiveness and whatever else they seek. God’s mercy is so bountiful on that day that it is said the only sin a person at Arafah can leave with is thinking he was not forgiven. Again, all a pilgrim is required to do is be in the right place at the right time to have all the sins of his past pardoned. Any troubles with the heat, long lines for bathrooms, or any other issues faced while there become so microscopic when compared with the vastness of what is received—essentially, a second chance at life.

The equation does not add up logically. A Muslim takes twenty, thirty, seventy years of sin to Hajj, where he needs to simply be in a certain place at a certain time for a handful of days. A few days of being outside your comfort zone cannot be deserving of forgiveness for a lifetime of sin by anyone’s standards, surely. But that is all God requested. He invited the pilgrims so He could shower them with His mercy—a mercy so vast that it is beyond anything the human mind can fathom. A Muslim already knew God as the Most Merciful, but the journey of Hajj truly allows one to witness that attribute in action.

May God accept the Hajj of all the pilgrims who made the journey this year and past years and continue to invite the Muslims to His House in the future.