In our current state of affairs in this country, outwardly practicing Islam can be a frightening endeavor for some. You never know if the person walking alongside you on the footpath or the driver in the car behind you is a person who reviles your religion. We have heard our president spew hateful comments regarding Islam that are false and bigoted to appease others who already dislike Muslims. While the environment can be hostile, we are still able to cling on to our basic human rights. Our law allows us to wear our headscarves, pray publicly, and declare our Muslim faith. Those who try to strip us of these rights are ultimately the ones at fault, and the law should ideally put them in their place.

Before the United States was even a country, though, this religious freedom we find ourselves practicing, was not a given. Many Africans forced to the American colonies via the Atlantic slave trade were dehumanized and given no choice in anything, including their faith. They had their Islam stolen from them. This was a time, as Imam Naeem Abdullah of Pittsburgh mentions in a sermon, during which Black slaves faced capital punishment simply for reading. They were not considered human by any means. As he says, they were “cargo on the ship.” The gravity of this truth is completely disturbing.

The harsh and horrid living conditions Blacks endured during the time of slavery makes the story of Bilali Muhammad that much more impressive. Born circa 1770 in present-day Guinea, he too, was a victim of the slave trade. He was originally taken to a plantation in the Caribbean and then later to Sapelo Island off the coast of Georgia. Although the Georgia colony instituted a ban on slavery in 1735, within fifteen years or so, the heinous practice was again legalized.

Muhammad’s slaveowner in Georgia was named Thomas Spalding. Unlike other slaveowners at the time, Spalding let Muhammad practice his Muslim faith publicly. He was even allowed to build a place for his prayer. This construction is what same say may have been the very first mosque in the continent. Muhammad would wear his kufi (religious head covering for men) and keep his prayer beads with him. Additionally, Spalding’s slaves were only to work six hours a day and were not commanded by White slaveowners.

Later during the War of 1812, the British tried to entice slaves to fight on their side by promising them freedom. Muhammad chose to fight with the Americans. Spalding entrusted him to oversee the plantation and its hundreds of slaves when he fled with his family in fear of attack. He gave Muhammad eighty muskets for defense. Upon Spalding’s return, Muhammad relinquished whatever control he had over the plantation in his absence, displaying his noble characteristics of trustworthiness and honor.

Perhaps what Bilali Muhammad is most well-known for is bringing Islamic scholarship to the United States. He originated from an extremely well-educated background in West Africa. Fluent in Arabic and his own Fula language, he was also learned in sayings of the Prophet Muhammad (may the blessings and peace of God be upon him), Islamic law, and Quranic exegesis.

When in America, Muhammad wrote a manuscript in Arabic from his memory. This manuscript contained copy from a Tunisian scholar’s writings on Islamic law, which was widely studied in West Africa, where Muhammad was from. What many assumed to be Bilali Muhammad’s personal diary was in reality a work of Islamic jurisprudence. Although he learned it several years prior, Muhammad was able to replicate it after arriving in America. 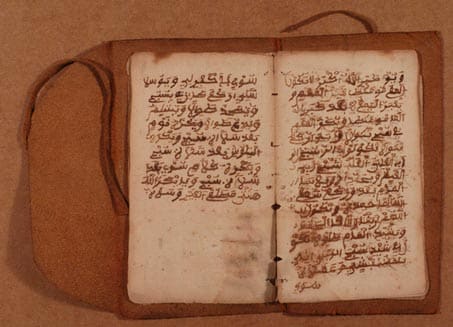 Today, this thirteen-page handwritten manuscript is known as The Bilali Document, and it is considered to be the first book of Islamic jurisprudence written in America. It covers everyday essentials for a Muslim from prayer times to ablution rites. The first work of Islamic scholarship in this country—which is now home to roughly 3.45 million Muslims—was the fruit of an effort from an African man who upheld his religion. Despite living in a time when people of his skin color were degraded and dehumanized after being dragged to a new land where they did not even desire to be, Bilali Muhammad left his legacy of scholarship for generations and generations to come.

From Bilali Muhammad’s story, we learn of a man who never hid his faith, even though he likely risked death with each public gesture of adherence to Islam. He serves as an inspiration to all those struggling today to practice their faith without fear, and of course, as Imam Naeem Abdullah reminds, with true gratefulness. While we live in a time that requires us to be cautious and on guard, we must recognize the vastly more difficult struggles those before us endured. Even having to live in such difficult environments, our Muslim forefathers in this country like Bilali Muhammad managed to plant a seed of Islam in American soil. Our religion’s history began as early as the others’ in this country. The more we learn about its roots, the more we can educate others, be thankful for our circumstances and the sacrifices of those before us, and practice our faith in its entirety.