In an effort to highlight inspirational American Muslims, WhyIslam spoke with Nagla Bedir, a high school social studies teacher in New Jersey. Bedir is the cofounder of Teaching While Muslim, an initiative that works to “fight against discrimination, implicit bias, and institutional racism, create a platform confronting issues Muslims face in public schools, and develop a network for Muslim educators.” Bedir was born in New York and is the daughter of two Egyptian parents. See what she has to say below.

Is being an Arab American a big part of your identity?

Nagla Bedir: I’ve had an interesting relationship with the idea of being Arab. Growing up, although I fully participated in being Arab with my family, it was a different story outside of my house. Although when people asked I would acknowledge that I was Arab, I felt disconnected from the culture outside of my home. I went to Rutgers University, and that eventually changed how identified but so did wearing hijab in my fourth year of college. Growing up, people mostly assumed I was Latina, but once I began wearing hijab, that perception changed and people just assumed I was Arab. I began embracing that part of my identity significantly more and I am proud of that part of my identity.

What is something a person who doesn’t share your background be surprised to find out about Arab Americans?

Nagla Bedir: I would say that we have some extremely different dialects, and although people lump all Arab Americans together, I wouldn’t understand someone from Morocco or Tunisia when they speak even though we speak the same language.

What is a misconception that really gets under your skin?

Nagla Bedir: The misconception that gets under my skin the most is the one about women being oppressed and submissive. I come from a family with very strong-minded women, and yes, our culture has its issues and there is patriarchy and misogyny—but that is a problem in men across all cultures and not everyone subscribes to those philosophies in any culture.

What is your go-to method to combat stereotypes and Islamophobia?

Nagla Bedir: There are many different ways that educators in general can combat stereotypes about Muslims, Arabs, and any targeted group in the classroom. Below are some slides from a workshop my co-founder and I recently gave about Orientalism and Islamophobia in the U.S. Personally, the way that I combat stereotypes and Islamophobia in my classroom is by being myself and answering the questions that my students always ask me about my culture, my religion, and my hijab. 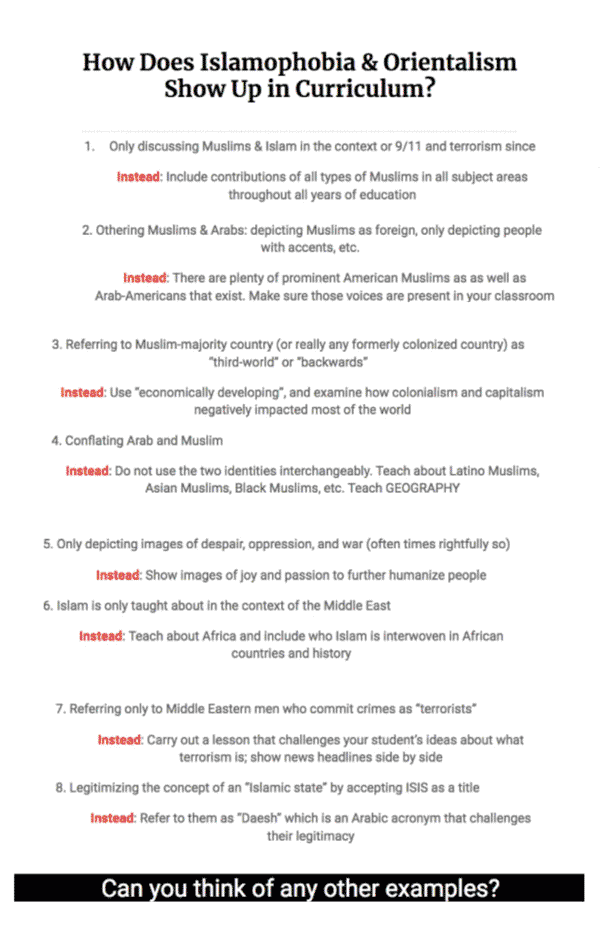 Why did you get involved in education? What goals do you seek to accomplish?

Nagla Bedir: I actually became a teacher because of the ignorance I experienced when I started wearing hijab. I went to Rutgers as I mentioned before, and Rutgers (New Brunswick) has a bus system to get around campus. On the VERY first day of me wearing hijab, I got on a bus and sat down in the only empty seat next to a white male. As soon as I sat down, he gave me a really dirty look, got up, and walked down to the other side of the bus. I was very taken aback by his reaction, and it was the first of many similar interactions since. But I wasn’t used to that experience since I passed as “normal” before that day without the hijab. In reflecting on that experience, I came to the conclusion that the individual responded to me that way because of his ignorance. And in reflecting on that ignorance, I came to the conclusion that the only way to counter that ignorance, the only real solution to ignorance, is education. I was already in the business of changing my major away from Public Health & the pre-med track, but I didn’t know what I wanted to do with my life anymore. But that semester I was also teaching a First Year Interest Seminar class to freshmen at Rutgers, and it was my first experience in a classroom and I loved it. So a couple of weeks after that interaction on the bus I went to see a dean at the Rutgers Graduate School of Education and completely changed the direction of my life—one of the best decisions I have ever made.

Do you think it is important for more Arab Americans to get involved in public school teaching positions? Why?

Nagla Bedir: This is an interesting question. I always say that exposure is everything. The more people are exposed to people that are different from them and people that challenge or defy stereotypes, the more implicit biases are likely to change. Of course, implicit biases are so deeply ingrained in our collective psyches that it is difficult to completely rid of them, but the more exposure, the more likely someone will think twice about that bias.

The other thing is, there are many Arab American students in public schools that could greatly benefit from having Arab American teachers. Not only will seeing themselves in their teachers be beneficial to their social and emotional growth, but those teachers could also serve as great role models for the students.

The last thing I’ll say about this, is that although identity is important, if someone is going to become an educator, it should be for the right reasons and the main reason should be to serve the needs of the students they become teachers to.

What advice do you have for students and parents who want to learn more about others?

Nagla Bedir: The advice I always give is to put themselves in positions to personally interact with others who are unlike themselves. If someone is too introverted to strike up a regular conversation with someone who is different, then the next best thing is to read books that feature characters with different identities. This is something we at Teaching While Muslim are attempting to put together on our website for people to have access to.

Is there any standout moment from your class that you’d like to share in relation to your Arab and Muslim identity?

Nagla Bedir: There are many, but I’ll share a couple. I have literally the best human beings as students, and although most of them have never interacted with a Muslim or Arab before, because of their love for me, many of my stories are very positive.

One of the most telling interactions with how deep-seated stereotypes about Muslims and Arabs were was in my Contemporary World Issues class a couple of years ago. Mind you, in this class we discussed stereotypes in detail and also talked about terrorism and challenged conventional definitions of terrorism. One day late in the year, I was showing my students pictures from my trip to Morocco the summer before because they kept asking me to see pictures. A picture popped up of me wearing the Keffiyeh around my face in the desert in a selfie with a camel and one student immediately shouted, “Miss, you look like a terrorist!” There was an uproar in the classroom, but when I asked her why she said that she said, “That’s what they look like in the movies.” It was a profound teachable moment for all of us.

I wrote a blog post about the impact of having a Muslim teacher. There are a few stories in this piece that are incredibly heartwarming about how students have defended Islam, despite the fact that I have never asked them to and they were in no way obligated to.

What do you consider your greatest accomplishment so far?

Nagla Bedir: This is a really difficult question because I am grateful for everything in my life, and I consider so much of my life an accomplishment. I’m the only person in my family with a Master’s degree, I became a teacher, I have been able to serve my kids (students) in so many countless ways over the years, and I take great pride in being there for them even after they graduate high school. Most recently, my greatest accomplishment is starting Teaching While Muslim, which is a platform that is explicitly anti-racist, anti-Islamophobic, and social justice based that shares the experience of Muslim Americans in public schools and addresses implicit bias in education.

What is one thing you want people to know about you?

Nagla Bedir: That I don’t fit into the boxes they create for me when they judge who I am as a woman, a Muslim, an Arab, a teacher, etc. I don’t fulfill the standards in any of those boxes people always try to place me (and everyone else) in.

I’m honestly humbled and really grateful when I get to share my story. Thank you for seeing value in telling my story and giving me and my organization a platform.