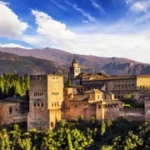 With its unique location at the foot of Sierra Nevada and stunning natural surroundings, Granada conquered the hearts of Arab Muslims. They established a prosperous, educated and versatile society in this city.

Under Almohad rule by the year 1200 C.E it was one of the most prosperous and the fifth largest city of Spain – Arabs, Spanish, Berber Muslims, Christians and Jews lived together peacefully and created a unique multicultural environment.  Silk and other textiles of unmatched quality were widely exported.  Agriculture flourished as never before – thanks to an excellent irrigation system.  It had three main centers: the palaces of the sultans known as Alhambra; El Albaicin, a walled hillside of narrow streets and labyrinthine historic quarter; and a new, flatter area where merchants established their businesses in a neighborhood known as the Alcaiceria.

In his essay, “Granada: a case study of Arab Urbanism in Muslim Spain,” James Dickie notes, “Houses were small, the rooms long and narrow, but practically all had cisterns and plumbing.  Inside, they were scrupulously clean.  Most houses had running water.  Water supply was of two kinds: for drinking and for sewage disposal; even Munzer, from hygienic Germany, marvels at what he saw.”

This society produced a great number of renowned scholars who frequently traveled for knowledge to the centers of learning in Baghdad and the East.   Some of them include: the geographer Al Mazini Al-Andalusi al Gharnati, the scientist and physician Ibn Tufayl, and the poet-writer Ibn al Khatib.

As the American author Washington Irving wrote, “The Arab conquest brought a higher civilisation and a nobler style of thinking into Gothic Spain. The Arabs were a quick witted, sagacious, proud-spirited, and poetical people, and were imbued with Oriental science and literature. Wherever they established a seat of power, it became a rallying place for the learned and ingenious; and they softened and refined the people whom they conquered.” [Read more: Islam in Europe]

The compounds of Alhambra are one of the numerous Spanish Muslim art masterpieces.  Alhambra is most probably the architectural culmination of Nasrid art and most of it was built during the time of Yusuf I and Mohammed V, between 1333 and 1354.

Dana Facaros and Michael Pauls, authors of Granada, Seville, Cordoba, say, “Granada’s gift was the Alhambra, by common consent the loveliest palace in the world, in the loveliest setting, underneath the snowcapped Sierra Nevada.  Such a past, combined with the rather gloomy history that followed, makes Granada the most wistful and melancholy of these cities…”

Alhambra got its name because of its reddish hue (red in Arabic is al-hamra).  This palace of startling majesty stood tall in the green hills above Granada and is perhaps the best example of what a medieval Muslim palace looked like.  Having an elegant, balanced combination of finely carved geometrical designs and marble work, Alhambra reveals the pinnacle of Islamic culture – different textures and elements of distinctive taste carefully bound together like a symphony to offer exquisite beauty and luxury to the inhabitants.  This was a place where scholars debated with other learned people on varied subject ranging from religion to philosophy and the new inventions in the fields of science and medicine. The privileged few reposed on lush carpets and dined on spiced delicacies served on Chinese porcelain.

Even though Granada was formally founded in the 11th century, Muslims had been ruling present-day Spain and Portugal since the 8th century. By the mid-thirteenth century, however, the Christians had conquered most of Muslim Spain. In 1238, Granada escaped this fate by signing a special agreement with the Kingdom of Castile, which enabled it to become an independent Emirate of Granada at the cost of an annual tribute.

Being the last Muslim stronghold in Spain, it accepted all the Muslims who were expelled from Spanish Christian territories such as Valencia and Almeria.  The size and strength of the civilization almost doubled.  Commerce and industry were booming again, art and education flourished and the little kingdom survived till 1492.

Yet, many problems continued to plague Granada, from reduction in agricultural production to dependency on rich merchants to fuel the economy. Perhaps the most significant reason of fall of Andalusia and Granada was the loss of legitimacy of emirs to rule in religious terms.   Politics became increasingly separated from religion that gave rise to fragmentation among Muslims of Andalusia.  A time when Muslims of Granada needed to join hands against Christian attack, they were weakened by internal strife, quarrels and jealousies among the elite and in the court of the emir.  Gone was the grand idea of building a universal Islamic community in Europe.

In The Moors of Spain, S Lane Pool writes, “Such a suicidal mania invaded the minds of the rulers of Granada at a time when every man they could gather together was needed to repel the invasion of the Christians, they wasted their strength in ruinous struggles with each other, and one would even intercept the other’s army when it was on the march against the common enemy.  The people of Granada, divided into various factions, aided and abetted the jealousy of their always fickle sovereigns.”

On January 3, 1492, Christian armies entered Granada triumphantly. Muslims of Granada were now subjected to genocide and ethnic cleansing – contrary to the promises and guarantees by the Christians that Muslims would be allowed to retain their properties and practice their faith. This was the tragic end of eight hundred years of Muslim rule in Spain.