More than 1,200 mosques and Islamic centers have existed in this country, according to a survey conducted in the latter part of the 1990s, but fewer than 100 were actually designed as mosques. The survey revealed that most Islamic congregations in the United States began in buildings that had been constructed for other purposes – fire stations, theaters, warehouses, and shops.The situation changed, however, after 1965 when the first large-scale influx of Muslims from various countries came to the United States. Mosques then began to be built for the sole purpose of ministering to the Muslim community as houses of worship and community centers. The great variety of religious diversity and ethnicity among American Muslims today is reflected in the variety of building design and organization.The photographer and chronicler of mosque architecture, Dr. Omar Khalidi, a senior research scholar at the Aga Khan Program in Islamic Architecture at the Massachusetts Institute of Technology in Cambridge, explains the three types of mosque architecture that now flourish in the United States. (Click here to arrange a visit to a mosque!)”First, there are mosques that embody a traditional design transplanted from one – or several – Islamic lands,” Dr. Khalidi points out. “Second, there are those that represent a reinterpretation of tradition, sometimes combined with elements of American architecture. Third are the designs that are entirely innovative, like those of the Islamic Society of North America’s headquarters in Plainfield, Indiana.”Most of the mosques in all three categories also function as classrooms, libraries, conference centers, bookshops, kitchens, and social halls, even as residential apartments.

Another important consideration in mosque architecture is the space for women to worship. In America, women generally are an integral part of mosque activities and play a very active role in the Muslim community. In a typical American Muslim family, the entire family turns out for worship, necessitating separate space for women, usually at a mezzanine level.

In manyinstances, mosque architecture in North America reflects the prevailing building designs of the area. “Over time a standard design will evolve which will be a happy blend between nostalgia and innovation,” Dr. Khalidi predicts. “The new emerging mosques in the West are a far cry from just domes and minarets.” (Read more: Mosques and Congregational Prayer)

Taken from the the site that is produced and maintained by the U.S. Dept. of State’s Office of International Information Programs (usinfo.state.gov) 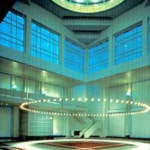 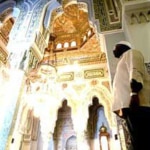 In Tempe, Arizona, a more traditional mosque with dome and minaret. 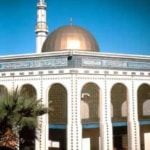